I’m in the process of coming up to speed to tackle a new feature request but it requires me to have multiple accounts for doing ignoring/blocking in the tests. To simulate that I was trying to use the FireFox private browser windows so I could be logged into the multiple users simultaneously and test the various permutations of people toggling ignore etc. Unfortunately what I’m finding is that the sessions are migrating between the private windows. So any login I do in one private tab is then being reflected in all the other tabs. Is this a misunderstanding of how private tabs work, an artifact of running the server in dev mode, or is this a problem with the way Diaspora is interacting with Firefox private windows that we should look into? I have it under developer support right now because I admit this may be a misunderstanding on my part. I’m going to continue testing for the time being by loading up multiple browsers…

Is this a misunderstanding of how private tabs work

Yes. All private windows in one Firefox instance share a cookie storage, so now matter how many private windows you open, they’ll all be the same. The same is true for Chrome.

Firefox users can check out this addon, Chrome users are out of luck.

Awesome thanks! Wow I did not know that. I had assumed a more complete isolation.

How about Firefox containers (inbuilt since a recent upgrade)? https://support.mozilla.org/en-US/kb/containers

Yep that was his suggestion. I’m using that now. It’s a lot less confusing than running four browsers haha. Is it only Safari that isolates cookies in private mode by default? Wow.

Oh sorry, I didn’t notice it was the same. I’d forgotten containers comes as an add-on. It is brilliant. I also use it to isolate sites that are likely to use trackers. I hope that its isolation is enough to protect me against trackers.

Anyway, glad you got your solution.

Chrome lets you configure multiple users, each with their own cookie storage.

Chrome lets you configure multiple users, each with their own cookie storage.

All tracked by big bad google…

You may flag it as offtopic, but it doesn’t make it less true. Using Google software gets you tracked and profiled by google. You don’t have to be logged in with a google ID, Google has enough info on you by fingerprinting your session: OS, browser + version, Hardware used,
Try the amIunique addon in Firefox and see what parameters they are collecting to identify you.
Against fingerprinting, you can use the Canvas Fingerprint Defender addon, which sends fake fingerprints.

Containers – with or without Mozilla’s extension – are useful, but not required.

Which version of Firefox?

Private windows in Waterfox 56.2.3 seem to not have that problem, at least for Outlook Web App. Here, two instances of OWA (two different accounts) in a single instance of Waterfox: 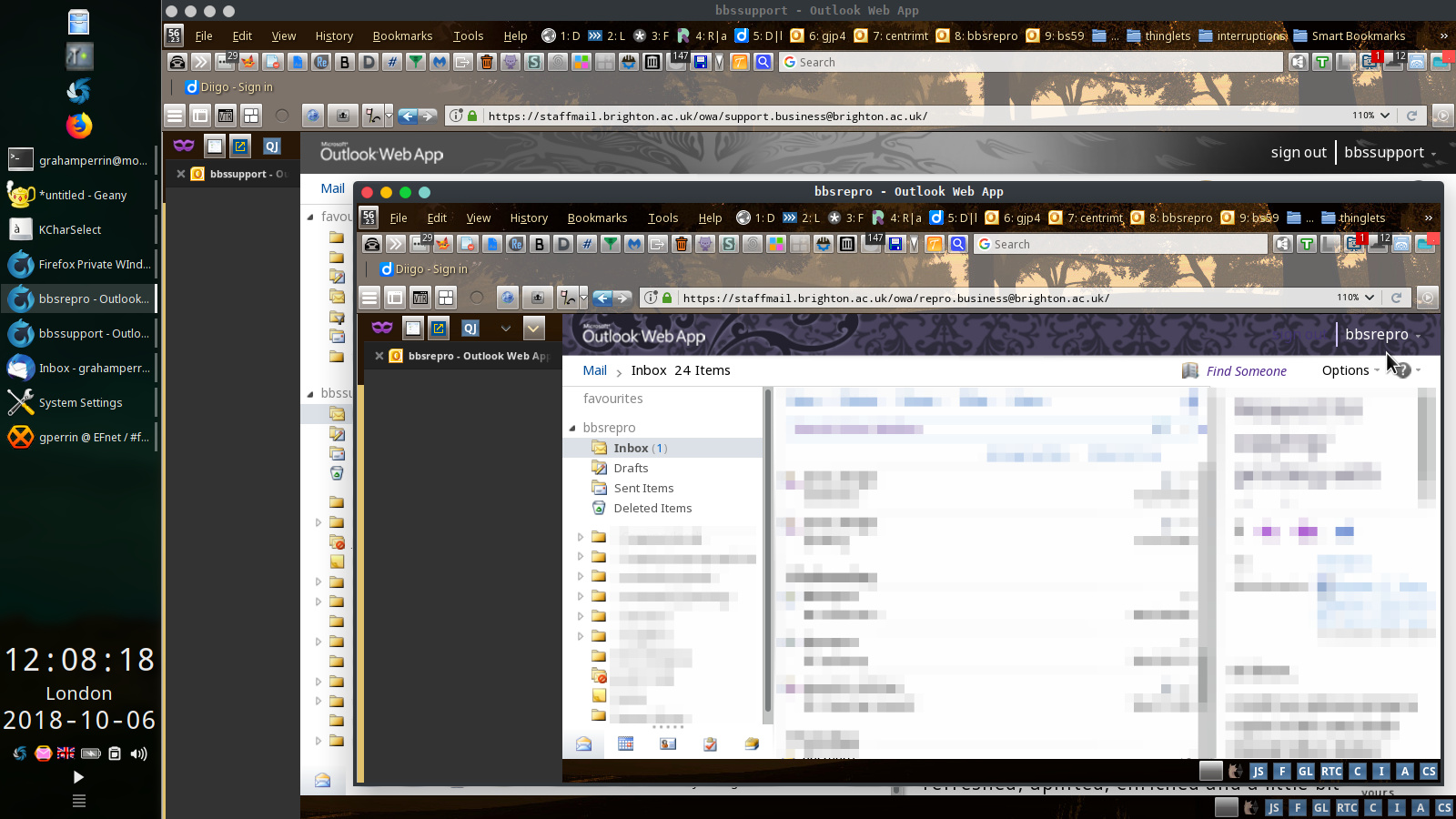 Postscript: sorry, a bad example. I later realised, what’s can pictured can be done with normal windows. Umpteen times in the past I ran in to problems with attempts to use multiple accounts in a single instance with normal windows, non-contained tabs. Right now I can’t reproduce any such problem.