It’s important to have a well defined branding, we should set rules and provide resources (for example in a wiki page) to help people who want to create around diaspora*.

I see a lot of stuff like diasporial, podupti.me, addons, reshare buttons… which use diaspora branding (the asterisk, etc) and I think it could be nice to write good practices about that.

For example, we should:

We should also decide what’s the “official” logo: the asterisk only, the “diaspora*” image, which one? Personally, I think we should not capitalize the d of diaspora*. This logo is the best imo: 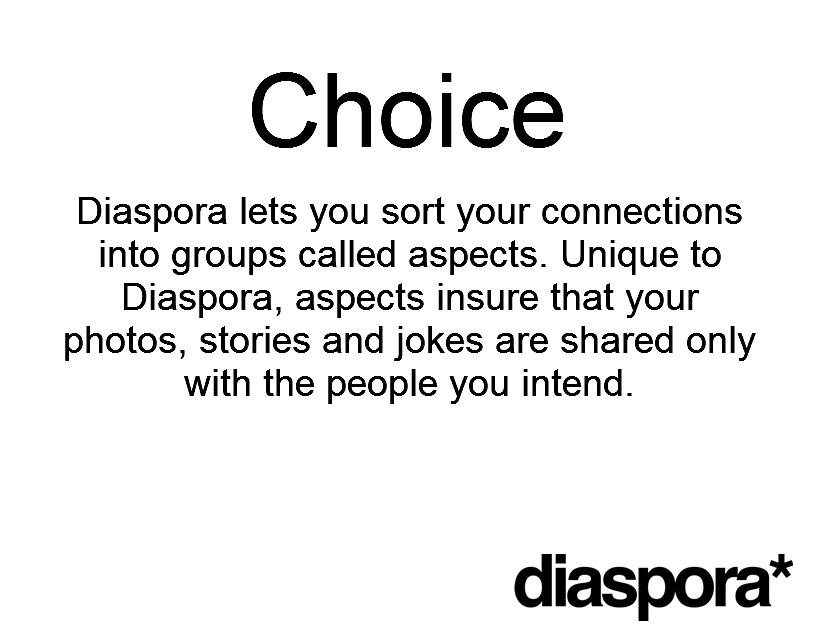 But there is also this one:

so we need to decide which one promote, etc…

Personally, I’ve always been partial to the lowercase bold diaspora*, but I think the asterisk is just as tied to our branding as the name itself is.

I originally styled the logo for the new project site this way, but then changed it because I couldn’t find enough evidence for its use elsewhere. I could commit this file to the repo if there’s agreement to go ahead with this style.

Should we have a proposal for using diaspora* in Roboto bold?

I agree with @jonnehass in this comment on Github that in longer documents such as blog posts and user guides, it is better to revert to the more tradition Diaspora (upper-case initial, no asterisk).

As to the two logos below, I still have a great fondness for the hand-drawn one (in fact there was a number of hand-drawn logos created), and think it would be a shame to lose it. However, this is more artwork than straight branding, and I think should be used in more arty cases, using the typographical logo and styling in text communications.

I think that’s a good direction…
using lower-cased with asterisk, roboto-bold for branding
and capitalized without asterisk for a proper name in longer texts

I think we need a proper vote on this before changing direction, as it is an important matter. It looks as though we have a consensus, but that is only among 5 or 6 people.

It would be best I think to have proposal and vote in the root group (Diaspora Community) of this Loomio group, so that everyone who’s signed up here will see it and can contribute, not only those who are a part of the Outreach group.

I’d say the first proposal and vote would be simply about the change from Diaspora* to diaspora* in text and logos, and we can vote on any other issues later.

Collating information from below, it looks as though the suggested practice (assuming the vote to move to lower-case diaspora* is passed) is:

As this is a fairly central issue it would probably make sense for someone ‘official’ like @seantilleycommunit to start the proposal, but I’m happy to do it if you want me to.

All your points are perfect. I’m almost convinced there is a consensus on that and we don’t need a vote.

I’m pretty sure on the consensus, too.

@goob: If you insist on having a proposal for this, I am certainly not against it, but I also am not 100% that voting on this particular issue would be all that necessary. I think your points are great as-is, personally.

@seantilleycommunit , I don’t insist - I just thought for something like this we should just make it an official decision. But if no one else feels that way I’m happy to go with the flow.

I’ve made a proposal in this discussion just to be on the safe side.

In our story about modern social networks we would like to introduce diaspora to our readers. Therefore I am inquiring about pictures of diaspora, the logo, maybe some display impressions on a smart phone, etc. .
Unfortunately I was not able to find picture material on your homepage.
Would it be possible for you to provide us with photos in a high resolution (300 dpi)?
Of course we are also going to publish your photo credits.

This inquiry came to the press box. We have https://wiki.diasporafoundation.org/Branding but it only contains small logos in PNG. Anyone got larger versions suitable for print?

Some good (non-propaganda) images we can use?

These are in SVG: http://naesk.deviantart.com/art/Diaspora-Artwork-Toolkit-254178705

Font n00b wonders if the font is the same one?

Can add these to wiki

Also maybe suggest to the person wanting to use an image in the article to take some wallpaper from here: https://wiki.diasporafoundation.org/Logos,_icons_and_visual_art

Have added larger & therefore high-res versions of the diaspora* logo and asterisk in Roboto to the branding page. Hope these are high-res enough for the journalist.

As for screen shots of the mobile site, someone could toggle to mobile mode on a computer, resize the browser window to the right sort of size for a phone screen and take some screen grabs that way. I guess the journalist themselves could even do it if they create a trial account on a pod, which might actually be a good thing to do in preparation for writing an article in any case. I’m afraid I’m not going to be able to do this myself at the moment as am pretty ill, but hopefully someone could step in.

Should we add an image from the logo in capitals (DIASPORA*) to the branding site? I think its good because in many parts of Diaspora it is used (some startpages, footer…).

@jonsger the logo in caps is being phased out.